Since February 2001, Jim Pourchot has an approved ministry with Community Ministries to Arizona State University faculty and staff called “Gatekeepers Watch”. Through various activities and one-on-one meetings, he encourages them to integrate their Christian faith into the academic context of a university community. To contact Jim, send a message to [email protected].

I dream that, should the Lord tarry, someday history books might tell a different story of a changed environment on university campuses. Instead of the secularism, relativism, and hedonism common today, I believe that there will be a revival of the values that great universities were once founded on. Due to the corporate faculty, staff, and student ministry organizations and the local church in the vicinity of Arizona State University, I hope to read of how in the early 21st century,

Christian faculty and staff have begun to dramatically influence the whole course of cultural norms from the campus of Arizona State University. Fortified by the finest team of faculty, staff, and local ministers, they succeeded in disarming the firmly entrenched philosophical roots of postmodernism, ethical relativism, scientific naturalism, and the selective bias directed against a Christian world view. While maintaining the steadfast rights and liberties of freedom of thought and speech for all citizens guaranteed by the constitution, their work resulted in a significant paradigm adjustment, regarding the Christian world view as a viable option for understanding the academic disciplines. The underlying assumption of objective truth was again a respected and accepted posture in most academic disciplines. Finally, from the persistent and consistent prayers of faithful students, faculty, and staff not only came a positive response to the Gospel but also a steady groundswell of spiritual renewal and social change the likes of which few have witnessed in recent memory.

Purpose and Objectives
My mission is: 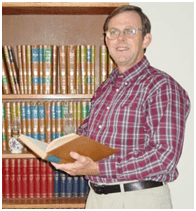 Jim Pourchot, a native of Phoenix, Arizona, enjoys living in and exploring various parts of Arizona. He also has lived in four other states and traveled to forty others in the USA. In addition, his ministry opportunities have taken him overseas to Russia, Israel, Jordan, Singapore, and the Philippines. Jim graduated from ASU in 1977 with a B.S. in Biology. In January 1978, he was accepted as a staff member with Campus Crusade for Christ (now CRU). Over the next eleven years, Jim participated as a vocalist with a music ministry, trained fellow staff for Campus Crusade, and traveled overseas on several evangelistic trips to Russia. During the last five years of his stay with Campus Crusade, he served as a researcher for Josh McDowell, the noted Christian apologist.

Jim completed an M.A. in Philosophy of Religion from Liberty University in 1995. Over the past nine years he has taught over 55 philosophy-related courses at several educational institutions in the Phoenix area. He has been a member of the Evangelical Philosophical Society for five years.

Since February 2001, Jim has participated with Community Ministries in a ministry to faculty and staff at ASU known as “Gatekeepers Watch”. He serves by initiating and organizing book studies on the ASU campus that focus on applying different aspects of a Christian world view to the issues of the times, especially those relevant to the lives of an academic audience. He has taught Bible, theology, and apologetics courses at his local church for the last three years. He and his wife Joni are active in their local church and enjoy fishing, hunting and camping.